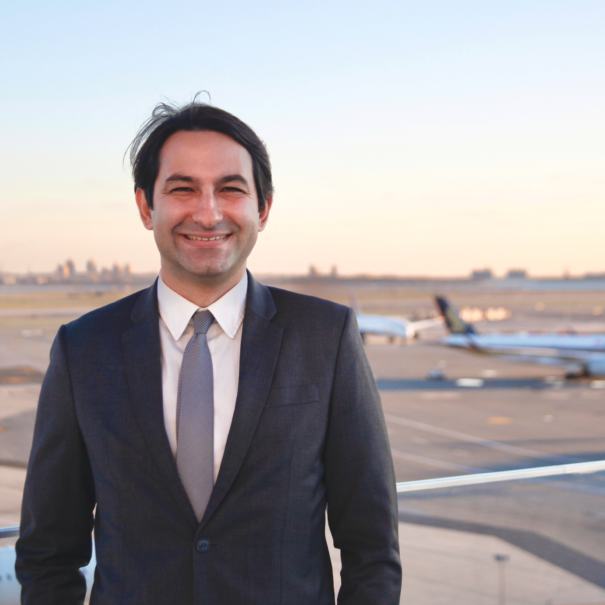 Dr. Stavros Sidiropoulos is the Founder and CEO of Vianair Inc. Dr. Sidiropoulos is an expert in mathematical optimization for terminal airspace design, transport systems and engineering. He has been collaborating with the Port Authority of New York and New Jersey (PANYNJ) since 2015 for his academic research and since 2017 for his work with Vianair. During this time, he has led a number of high impact aviation related projects. In 2018, he led a PANS-OPS evaluation study for two approach procedures in Tokyo Haneda airport for Delta Air Lines. In the period between 2018 and 2020, he led three airport noise mitigation studies for the Cities of Seatac, WA, Laguna Beach, WA and Arlington and Montgomery Counties, VA, where the Vianair team developed and evaluated novel SIDs, STARs, and IAPs to increase operational efficiency and mitigate noise impact in the aforementioned areas.

In 2015, Dr. Sidiropoulos led a high-level pilot fatigue study carried out by the Lloyd’s Register Foundation Transport Risk Management Centre on behalf of the European airline carrier, EasyJet.  In this study under his direction, the group assessed a number of human factor elements associated with pilots’ performance in relation to different pilot rosters for the airline’s operations. The results were of critical importance to the EasyJet’s operational efficiency in terms of better organizing their pilot roster, while accounting for safety of operations.

Also in 2015, Dr. Sidiropoulos led a consultation study for the European Commission FLITE project. For this he conducted a complex, novel future air traffic demand analysis for the European network following the Flightpath 2050 program directions, within the EU funded FLITE project. His novel contributions and conclusions for this study had significant impacts on the field wherein the FLITE project was part of the SESAR WP-E package.