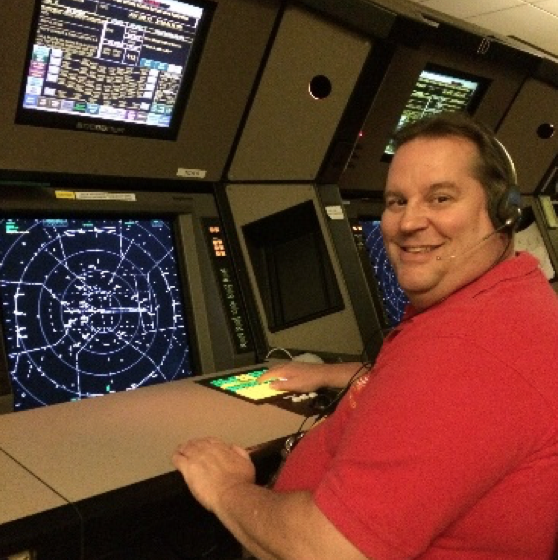 Jim Allerdice began his Air Traffic Control career when he entered the United States Air Force in May 1980. After receiving an Honorable discharge from the US Air Force, Jim began his 31-year FAA career in November 1983. He has worked in all types of Terminal facilities culminating with over 22-years at Atlanta Tower/TRACON.

Jim was the Chief Designer of the Area Navigation (RNAV) infrastructure for the Atlanta Hartsfield-Jackson International Airport (ATL). He pioneered new and innovative designs such as the Equivalent Lateral Spacing Operations (ELSO) based on the MITRE Study, which enables reduced divergence RNAV Off-The-Ground (OTG) departure operations. The ELSO design has exceeded expectations since full implementation in October 2011.

Jim was also heavily involved in the research and development of Optimized Profile Descents (OPD). Through collaborative efforts with Georgia Tech and the FAA, some of the first OPD Standard Terminal Arrivals (STARs) were designed and implemented within the Atlanta airspace.

Jim was the Lead Specialist for the Atlanta Class B Airspace redesign. This required organizing public forums for discussion and feedback on the Class B design through contacts with local, state, and federal agencies. Jim was also the Lead Presenter at numerous public forums interacting with various groups that were interested in the impact that the proposed design would have on their homes, businesses, and communities.

Jim was presented the Secretary of Transportation’s Award for Excellence on November 15, 2012, for “Outstanding Service to the American People, Recognizing [his] Dedication, Achievement, and Leadership in the areas of Performance Based Navigation, Environmental Stewardship, and Fiscal Responsibility.” This award was presented for his work designing and implementing Performance Based Navigation procedures as an Atlanta TRACON Support Specialist.

Since retiring from the FAA in November 2014, Jim, and the other founding partners, formed ABCx2, LLC, a consulting firm that is dedicated to providing support for communities impacted by aircraft noise surrounding America’s airports, big and small. Jim has been Managing Partner for ABCx2 since February 2015. ABCx2 provides advocacy for communities with airport staff, the FAA, and the aviation industry to reach collaborative solutions for impacted communities that provide meaningful, measurable, and implementable results.